Cheerfulness in all situations, especially the bad ones

Cheerfulness in all situations, especially the bad ones.

James J. Jeffries came out of retirement to beat a black man down.

It was 1910 when the Great White Hope said, “I am going into this fight for the sole purpose of proving that a white man is better than a negro.” It had been five years since his previous boxing match, and two years since a black man won the title of World Heavyweight Champion.

The son of two former slaves, Jack Johnson represented a threat to the belief in white superiority. Having a black man hold this title was almost as insulting to racists of the day as Johnson’s three marriages to white women.

When Johnson stepped into the ring with Jeffries, he said, “May the best man win.” No matter who won, though, many in the crowd would forever despise Johnson for being black, and he knew it.

He didn’t try to fight that hate. Instead, he smiled at it. 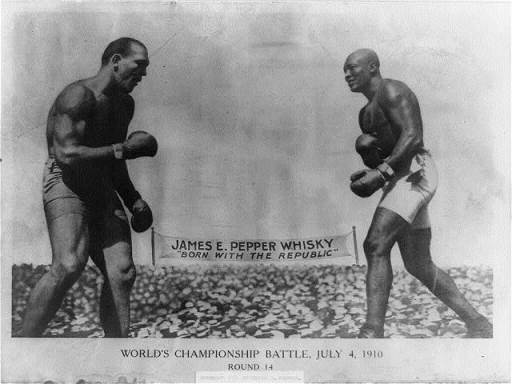 In the third round of the fight, Jeffries landed a blow on Johnson’s black lip, splitting it open. Johnson continued smiling his bloody smile through 12 more rounds. Every round he would get friendlier, and happier, and smile bigger, until for the first time in Jeffries’ career he was knocked down.

Johnson was famous for fighting with this “golden smile.” His grin would grow as his opponents hurled punches and racial slurs, and instead of getting angry that all these white men hated him so much, he smiled at them.

This very cheerfulness incensed his opponents, making them even angrier, opening them to more mistakes. Johnson turned their own rage against them, by refusing to be the object of it.

Johnson never saw himself as an inferior, or a victim, or angry that he lived life at a disadvantage. When life was difficult, he smiled at it.

When you are angry, or hurt, or fearful, you won’t make the best decisions, and it is precisely in those stressful moments that a clear head can aid your decision making the most.

Cheerfulness in all situations – especially the bad ones.

Johnson would never have won his boxing title if he was angry – he would not even have had the opportunity to fight for it. Most champions did not fight black boxers. Johnson stalked the Canadian boxer Tommy Burns for two years, following him across the world, taunting him publicly to fight him in a title match. His cheerfulness and bravado made the fight happen, not his anger or resentment.

When Thomas Edison was interrupted from dinner with the news that his laboratory was on fire, he rushed to the scene, where brightly colored flames from his chemicals and experiments grew to seven stories high.

Instead of weeping and wailing and gnashing his teeth, he grabbed his son with excitement and said, “Go get your mother and all her friends – they’ll never see a fire like this again!”

Years of research, prototypes, and records were lost to that fire. “It’s all right,” Edison later said, “we’ve just gotten rid of a load of rubbish.” Within three weeks the factory was working again, and in that same year that he lost a million dollars from the fire, he generated ten million dollars in revenue from what he did after it.

Could Edison have turned this disaster into such a victory if he were not cheerful? Could Johnson have kept his cool in the ring without his smile?

The ability to respond intentionally to any situation is a habit you can learn. Once you free yourself from the expected reaction, you can decide the best response to any situation, no matter how good or bad it may seem.

“It is not external events themselves that cause us distress, but they way in which we think about them, our interpretation of their significance. It is our attitudes and reactions that give us trouble. We cannot choose our external circumstances, but we can always choose how we respond to them.” – Epictetus

“It is the act of turning what we must do into what we get to do,” says Ryan Holiday, author of The Obstacle Is The Way.

You can read more about Jack Johnson in Badass of the Week.

In other news: this month I redesigned my portfolio. Feedback welcome.