First thing in the morning, you are the dumbest you will be all day.

When I wake up to my alarm at 5:30, my body tells me very clearly that it wants to stay in bed. Every time.

But the alarm is ringing across the room. To make the noises stop, I have to get up and get out of bed. Once I turn off the alarm, I push play on my Power Playlist, and continue with the morning routine that was set up for me, back when my brain was not so stupid.

I am not allowed to make any decisions at 5:30 in the morning. The 5:30 Caelan makes bad decisions. I don’t trust him, and to make things easier on everyone, I just tell him what to do. 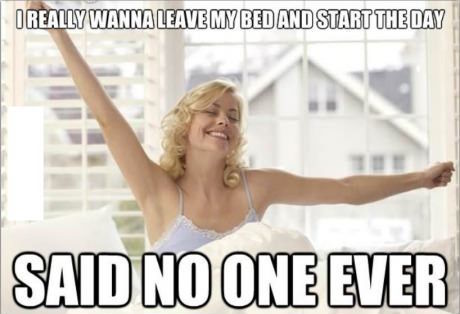 As I said in my workshop last week on Waking Up Early, making a morning routine means you never have to make decisions.

When I wake up, right next to the front door are my gym bag and car keys. All I have to do is pick up those two items and walk out of the house, and by then the brisk morning air has hit my face, and I’ve woken up enough that exercise sounds like a pretty good idea.

I don’t decide anything early in the morning; I automate everything, and prevent the sluggish, non-functional early morning brain from making any decisions.

If a new habit is difficult, do the hard work to make it easy.

Every night, I prepare everything I will need for my morning routine, to remove every possible decision from the path of 5:30 Caelan. If my workout clothes were still in a drawer, and my padlock other than my gym bag, and my keys in yesterday’s pants, I would have faced difficulties that would make my 5:30 self surrender in defeat, and to the bed I would retreat.

By making it easy, the habit became automatic. I did not have to think about what to do next, I just followed the preprogrammed instructions until I was sweating and exercising, just the way I decided to every morning.

Using your willpower reserves to accomplish automatic habits is not only inefficient, it also depletes the willpower we need to prevent bad habits.

You can preserve your limited willpower supply by automating the new habits you want to begin.

Don’t decide on your habit every time you need to execute it. Make it as automatic and effortless as possible.

What is one habit you can automate? Pick an early morning habit you’ve been meaning to do regularly. Prepare everything needed for the habit in the evening, before you go to bed, and if it makes the habit easier to accomplish, keep doing it.