Completion is a habit you can master.

This past weekend, I spent my time manning (or personing, if we’re going to be all gender-neutral about it) a table at the World Domination Summit. This table was the checkpoint for everyone running around on a treasure hunt I created – and this treasure hunt almost didn’t happen.

See, I just moved a week ago. We were still cleaning out the old house, and unpacking into the new house. It would have been really easy for this fun, extracurricular project to get lost in the shuffle – but thankfully, it was already in my task management system.

Your system protects your projects from procrastination.

While I was person-ing this table, a book on the shelf nearby kept catching my eye. It was called “Making Ideas Happen” by Scott Belsky, the CEO and founder of Behance. Reading this book has been a productivity geek session.

Belsky had a very Napoleon Hill-type of job early in his career. You know how Napoleon Hill interviewed all these titans of industry to uncover the common key of success? Well, Scott Belsky worked for a financial services firm in a similar capacity: his purpose was to study the habits of the top performing leaders in the industry, and provide leadership training for those rising in the ranks.

This enabled him to study, in detail, what makes highly productive people different from the rest.

After founding Behance, he had the data of thousands of creative professionals at his disposal, and applied the same analysis to examining how creatives work. There is a big difference between the procrastinating geniuses who get nothing done, and those of average creativity who complete tons of projects. 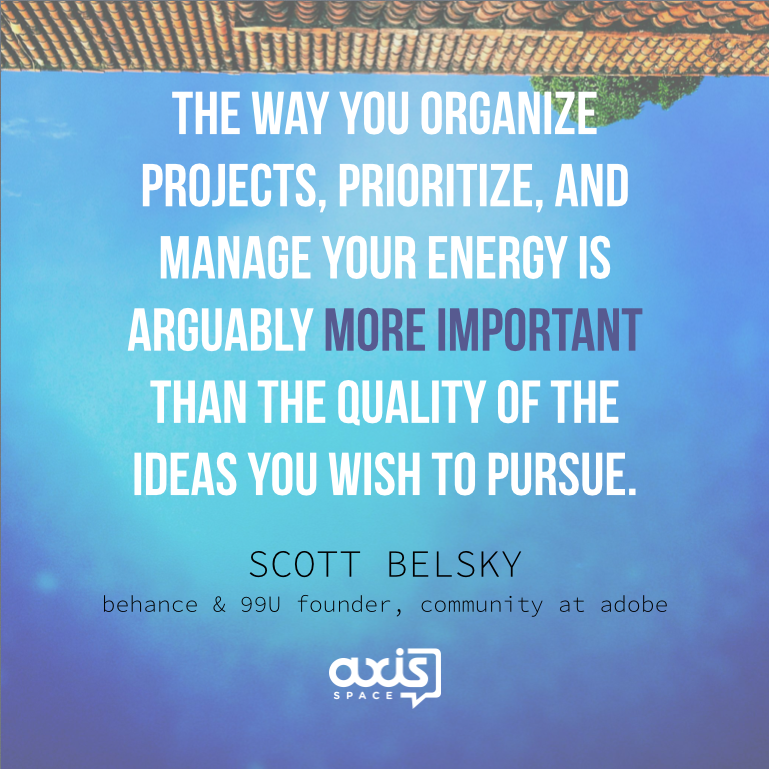 Here’s what I’ve learned so far:

1. Separate your Urgent and Important tasks. By keeping them in the same list, you are constantly going back and forth between time-intensive high-creativity tasks, and mundane errands. During errand time, do the things that have to be done right away. During creative time, do the things that require creativity.
2. Start your tasks with a verb. “Verbs help pull us into our action steps at first glance, efficiently indicating what type of action is required,” Belsky says. I tried modifying my daily list by throwing some verbs around, and it immediately felt more actionable.
3. Everything is a project. Your household finances, the report that’s due next week, fixing the car, the website redesign – everything is a project.
4. There are 3 Components of every Project: Action Steps, Reference, and Backburner Items. Everything you need to know about a project, everything that has to be done, everything related to what you’re doing, can fit into one of these three categories. By segmenting your Action Steps away from all of the ‘stuff’ that can clutter your vision and interpretation of what has to be done, you can review your project with an unfiltered view for getting things done.

I’ve been using the GTD system (Getting Things Done) by David Allen for years, to great effect. It’s very rare that I see a system of productivity that can eclipse (or even complement) that exceptional system of making things happen. The Action Method developed by Scott Belsky is one of them, because it develops what he calls “a relentless bias towards action.”

Action makes things happen. With so many lists and projects going on in the last week, I could have easily found myself at WDS without a completed treasure hunt. Thankfully, I outlined the entire project weeks ago, scheduled the Action Steps for the weeks they needed to happen, and whenever I had a spare moment to work on the project, I didn’t spend a moment wondering what to do next; I opened my list, and I did the next thing.

If there is a stalled project in your life right now, ask yourself this one simple question: “What’s the next action?” Make this your habit. Ask this question all the time.