To Make a New Habit Stick, Remove Your Willpower

To make a new habit stick, remove your willpower.

Your willpower can be depleted, if you’re not careful.

Sara was a ballet dancer in New York City. She knew she could only stay in such a competitive field if she trained every day for hours before daybreak.

Every morning, she hired a taxi to meet her at her apartment at 5:30.

When her alarm went off, there were zero decisions to make. She only had to grab her pre-packed bag, get downstairs, and get in the taxi that she had already paid for. By the time she was fully awake, she was on her way to her dance studio, where she would stretch and sweat and push her limits, training to become one of the best dancers in the city.

If she had to make this decision herself, she told me, she would never get up that early every day. If she was still in her apartment at 6 am debating whether or not she would dance that day, chances were pretty good that she would talk herself out of it sometimes.

So she removed her willpower. She made the decision once, and then she could save her willpower for the rest of her day.

Her morning routine consisted of one, actionable task: get into the cab. Everything else came naturally after that, due to what Tyler Tervooren calls a ‘habit ladder.’ By sticking to one habit (get in the cab) she was able to climb easily to her next habit (dance and exercise early in the morning). 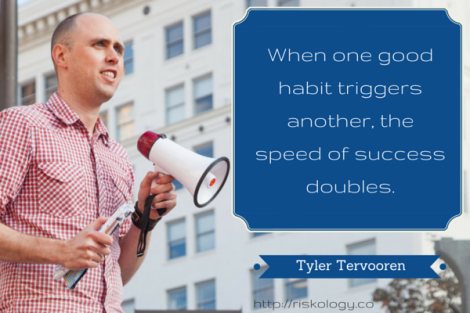 We can only make so many tough decisions in a day. That’s the beauty about habits and routines – after the decision is made once, it never has to be made again.

One of the reasons this works so well is that we only have a limited amount of willpower. In their book, “Willpower: Rediscovering the Greatest Human Strength,” authors Roy F. Baumeister and Jon Tierney describe psychological experiments proving that if we use too much of our willpower, decisions we make later that day have a greater chance of being the wrong ones.

To make a new habit stick, remove your willpower.

Those who ate the radishes, and had to exert self-control to keep from eating the cookies, gave up after 8 minutes, while the cookie eaters persevered for 19 minutes.

When that study was published in 1998, it laid the groundwork for a theory called Ego Depletion.

By using your willpower to make a decision, the Ego Depletion theory goes, you are reducing your reserves of willpower, and making it more likely you will not make good choices later. This is why Steve Jobs famously wore the same outfit every day: black turtleneck, blue jeans. By removing the need to make choices about what to wear, he had more willpower available to draw from throughout the day.

How can you remove your willpower from your routine?

Are you making any decisions that don’t matter? Automate one choice that you make early in the day. Hit ‘Reply’ and tell me about it.

Bonus Tip: How to Boost your Willpower

If you have been making lots of choices, and you fear you won’t make good choices later, you can reverse the effects of ego depletion by laughing. Watching something funny has been scientifically proven to buffer the effects of Ego Depletion.

So if you don’t yet have a morning series of habits (like a Power Playlist) that can automate your morning routine, then do yourself a favor and get really happy by watching this video. (This seven minute video is, in all honesty, the funniest thing I have ever seen in my life. Do yourself a favor and watch it full screen with no distractions.)